I’ve had a WIP come and go so quickly that I haven’t had a chance to blog about it! Now that’s an achievement. 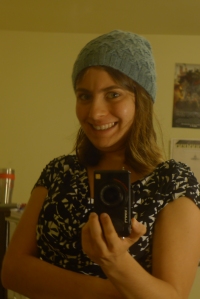 One of my friends requested a floppy hat for the Holidays. Of course, then she refused to go through the list of patterns that I picked out on ravelry, which made life just that much easier for me. Eventually, I settled on the free Pup Tent pattern. I’m not completely crazy about how the stitch pattern looks, but it works. And it’s not like I’ll be the one wearing it! 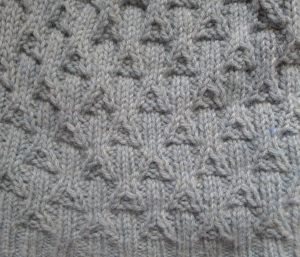 Close up of the stitch pattern

I used about 80% of a skein of Valley Yarns Northampton (100% Wool), a crunchy, authentic, wooly worsted yarn. Yumm. After my friend requested a “cool teal,” she picked this skein out of my stash. It’s not exactly soft, and I’m not sure I would describe it as having any drape, but the finished hat is sure slouching pretty well!

From the side- slouch!

I did add an entire extra repeat of the stitch pattern to get that extra slouch. The hat looks funky laying flat, but I think it looks great on! Plus, she has a lot more hair than me, so this should fit nicely on her. I hope!

Oh, and by the way- my newest design, the Daniela Cowl, is finally up for purchase on the Knit Picks web site here. Knit Picks gives 100% of the profits to designers, plus they offer yarn support, which makes them a pretty awesome company in my book!

I’m chugging away on my Coquette Vest. The lace pattern is pretty intuitive, and I think it’s coming along nicely. My progress was somewhat impeded by the dog getting hold of the yarn and tangling it up a little while I was home last weekend, but I straightened that out pretty quickly. I’ve probably gotten another 3ish inches since last week, which is pretty impressive considering I’m using lace weight Filigran and haven’t had a whole lot of knitting time.

Unfortunately, it’s probably going to have to go on the shelf for a while in favor of Christmas Knits. I finally got the HUGE order that I put in at Webs a couple of weeks ago, so now it’s time to start working on that.

First, there’s a single skein of Berocco Vintage DK (50% Acrylic, 40% Wool, 10% Nylon- 288yds/100g). It’s much more of a cranberry color than you can tell in the picture, I promise. This is destined to be a beret for a friend. Ok, it’s for her Birthday, which was a couple of months ago, but it still counts. Honestly, we were on opposite ends of the state, so I like to think that I’m doing ok.

Next, there’s about 9 skeins of Valley Yarns Superwash DK (100% Extrafine Merino- 137yards/50g) in a minty green color. This was more of a guilty purchase for me than anything else- I think I’m going to use it to make myself a sweater! It’s incredibly light and lofty, so I bet it will make a comfy cardigan. 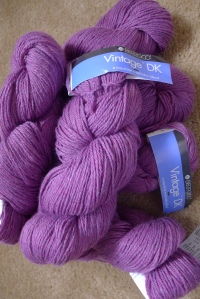 This is another 6ish skeins of Vintage DK in fuchsia (a little darker then this) for a Hanukah sweater for my mother. She picked out the color online, so this time she can’t say that she doesn’t like it!

Next, there’s a single skein of Valley Yarns Northampton (100% Wool- 247 yards/100g) in Lake Heather. It’s much greener than the picture! This will probably make someone a hat at some point in time- it’s a just-in-case yarn. Ok, so it will probably end up in my stash. What’s wrong with that? 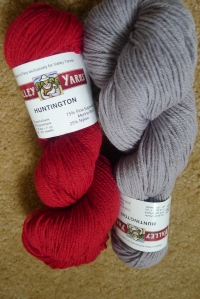 Last but not least, there’s two skeins of Valley Yarns Huntington (75% Fine Superwash Merino Wool, 25% Nylon- 218 yards/50g) for future socks. Yes, this is also stash, but let’s be honest- I make a lot of socks! They would go really well with one of my crazy-er yarns to make the Stitch Surfer socks from the new Knitty, wouldn’t they? Those socks are really cool, so if you haven’t seen them yet, check them out!

That’s about all for me on this WIP Wed. I know that I haven’t been blogging a lot recently, but life has been really hectic. I’m trying! Hopefully, I’ll have a long overdue blog WEEKS in review this weekend. Hopefully. If you want to see MORE WIP Wed. posts, check out Tami’s.

close-up of the crazy

So, I’ve finished the knitting part of the green scarf. As you can tell, it still looks like a mess of green yarn. Like it’s sister, the as-yet-unblocked mini-scarf hopefully, the blocking will stretch it out and make it bloom PERFECTLY. I have high, high hopes.

Remember when I was babbling about making Christmas hats last time? Well, now I’ve decided to ACTUALLY do it. I have a friend who I’ve never knitted for, but she’s studying abroad next semester and I’m sure she’ll need something to keep her warm. I I’m going to use two little bits of leftover yarn and try a top-down hat. I’ve never really done one before, but I just cast on a few stitches, and then increased in the same way I would decrease on a regular hat, and I think it worked out well. For the top part, I used leftover Valley Yarns Stockbridge (50% wool, 50% alpaca) from my Military Cardigan for the top part. I was trying to stop when I had enough left for about an inch on the bottom, but that didn’t really work out very well. Anyway, the other yarn is Cascade Dolce (55% Alpaca, 23% silk, 22% wool) in a silver color. I don’t remember what happened to the rest of the skein- it must have been some sort of gift, but there was about 10g left for a nice band around the center of the hat. The Dolce is just a little bit heavier than the Valley Yarns, but you can’t tell very much. Anyway, here it is..it’s almost finished!

The luscious fiber mixture should keep my friend warm during the freezing England winter! I’m probably going to quickly write up the pattern and post it on ravelry, just as a top-down hat recipe. Keep your eyes open for that- I promise it’ll be a free pattern. And speaking of patterns, my Slightly Skewed hat and scarf set has just hit 50 free downloads, so I think I’ll probably change it to pay soon (as in within the week- if you haven’t downloaded it yet, but would like to, you should do it soon!). I like the idea that the first 50 downloads are free. It makes me feel like I’m rewarding my readers…Any thoughts?

After reading all of your comments about how much you pay for patterns, I’ve settled on charging $2.50 for the lot. This charge will (probably) mostly go to my yarn fund, with occasional dips for necessities like…food. Anyway, if you’re desperate to knit this pattern and really can’t afford the charge, please get in contact with me and we’ll work something out.

Since the temperature dropped last week, I’ve finally been able to pull out some of my knits from last year. I thought it would be fun to showcase some of my favorites on the blog. I mean, it COULD be cheating, because I haven’t actually finished the objects recently, but if I didn’t tell you, you wouldn’t know 😉

sniped from the ravelry page (link below)

So, to start us off, I’m going to show you one of my proudest moments. At the beginning of last year, I saw the Veronik Avery pattern Military Cardigan SOMEWHERE (where exactly? I have no idea) and HAD to make it. After obsessing over it for a week, I ordered the book, Knitting Classic Style (Ravelry/Amazon/BN), and set to work looking for yarn. I started thinking about grey, especially because it generally looks good with jeans (which is pretty much all I wear during the winter) and because I don’t really have any grey sweaters. After a bunch of hunting around online, I settled on Valley Yarns (the webs’ house line) Stockbridge in a dark grey color. The Alpaca content of the yarn gives it a ton of softness and drape, but the structure built into the pattern really fits it well. And thus, my Military was born. 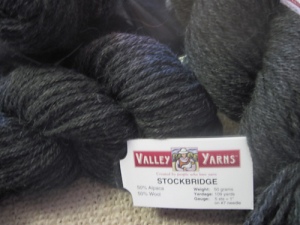 my yarn, pretty close on the color

This is one of those patterns that was a bitch to make, but not because things went wrong. I mean, I could tell going in that it’s a really complicated pattern, and I was pretty prepared for the headaches that it would cause, which was good, because I did get those headaches. But still, eventually I ended up with a finished sweater with relatively few mistakes. I mis-crossed a couple of cables, but I think I tinked them all back- I haven’t found any in the finished sweater, at least. At some point, I got really confused about the difficult directions for the button band and collar. I actually emailed Veronik, and she got back to me so quickly, assuring me that her numbers were right, and that there was some magic that would happen as long as you followed the pattern. Which I did, and it did happen. Also, the pattern calls for you to cable on both knit sides of the rib along the button bands and collar. Of course, I didn’t realize that this is so you’ll see the cables where the collar is turned up until AFTER I had finished it (without cabling on the inside). I think that’s why my collar is a little more shape-less than the sample seems to be…but I’m not really concerned about it. It takes a little bit away from the whole severe-military aspect of the cardigan, and makes it more comfy, which isn’t exactly a problem.

isn't the collar a little flatter?

The other thing that makes the cardigan seem a little bit more comfy is the yarn choice. As I mentioned, Stockbridge has quite a bit of drape. I can’t remember if I modded the sweater to make it longer, or if it’s just the drape in action, but it definitely comes much further down on my waste than the sample does on the model. Again, not a problem. Jeans made for girls my age are pretty low cut, and any sweater that will keep my undies from showing is a good thing!

close up on those gorgeous cables

Unfortunately, the Alpaca is so warm that I can’t really wear the sweater on a regular basis. Unless the room is freezing, I pretty much burn up in it. And the double-breasted buttons aren’t really conducive to taking the sweater on and off every time I leave a room, especially if I am wandering around campus… which is something I usually do. Still, this is my go-to sweater for going out in the cold, and I like to think it came out spectacularly!

from the side- the drape+shaping+vents=flattering!