Spiraling, from the back!

I have a new pattern out! The C’Mon Baby (Twist and Slouch) hat is a slouchy beret perfect for the hipster in all of us. The lacey, twisting rib will catch the knitter’s attention without being too difficult to remember. Plus, it creates a nice looking hat! I’m particularly in love with the spiral-y thing on the crown.

Side view. My awesome roommate was modeling in Colonial Williamsburg- super fun!

You will need about 80g of worsted weight yarn to complete the project. I recommend anything with some drape. Alpaca blends, like Cascade’s Alpaca Lana D’Oro, work really well. It is a bit big (the model has a larger head…) so pay attention to guage and don’t be afraid of going down a needle size.

Laughing at my photography antics- "put the hat in the light!"

If you’re interested in this FREE pattern, check out the ravelry pattern page here, or directly download the pdf here. As always, you can also see it way on the bottom of my designs page, here.

Usually, I’m (gasp!) a pretty monogamous knitter. Maybe it’s my attention span- if I don’t love a project enough to work on it right away, I probably don’t love it enough to come back and knit it. After about a month, I generally have to admit that any project that I haven’t worked on is probably never getting finished. Usually, I’m OK with that. At this point, though, I have a bunch of different things happening in my life and my knitting, but that doesn’t mean I love any of them any less.

First, the hat out of Freedom Spirit. I was kind of winging the pattern. I felt like plain stockinette would get the best effect out of the pretty busy yarn, and I was right. It looks self-striping and awesome. Still, I have a couple of grams of yarn left, so I’m probably going to rip out the decreases, add a couple of rows, and then re-knit them. Of course, this is going on the backburner until I can get some of my other WIP’s finished.

Second, we have the design for Knit Picks Independent Designer Program. It’s coming along really well, but, as I’m pretty much writing the pattern as I go, it’s taking longer than I’d like. I’m just using Wool of the Andes Sport (100% Wool) in Sagebrush, so the yarn is just a simple, satisfying wool with no fancy-ness. It’ll really show off the stitch pattern well, and I’m excited to get some test-knitters on it to see how it’ll look in different sizes. I’m thinking I’ll range it from baby to adult, because it would be really, really cute on some adorable children!

Although I’m not knitting anything else, there’s a bunch of other things taking up attention that COULD be spent on knitting. One of my design projects is in the test-knitting stage now. All of my testers are being SUPER understanding around my struggles. See, the stitch pattern is extremely intuitive, but not, as it turns out, very easy to write. I think, after three or four different versions of the pattern, I’ve found a way of presenting the decreases, which continue the stitch pattern, a lot more easily. Still, it’s taken time and a whole lot of effort to get here. Hopefully, this will be shown in the finished pattern.

And then, of course, there’s all the projects that I’ve planned to do with my new yarn delivery. After these two hats are finished I’m FORCING myself to work on the mittens. It’s getting pretty cold here, and stuffing my hands in my pockets while I wait for the bus or walk from the far reaches of campus isn’t going to cut it anymore. The sweater-making urge that’s been taking over me in the wake of finishing Livingstone will just have to wait. And I think I might get a chance to hit the yarn store this weekend…

So…I’ve finished the sample of the new design. I thought that this time I’d try using some test knitters, considering the fact that I’ve already had to make two corrections on the written instructions to old patterns. If you’re at all interested in test knitting a worsted weight, slouchy hat, you can check out all of the information on my post in the ravelry free pattern testers group. I have BOTH charted and written instructions and would welcome test knitters of all skill levels, so please leave a comment on that post if you are willing! 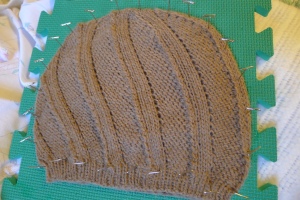 I’ll be back tomorrow with my regularly scheduled blog post…which may just be a finished object post (only a day too late for FO Friday…)!

So, as I showed off in the last post, my big project, the Livingstone Cardigan, is sitting on my floor blocking. Wet blocking and chunky wool will take another day or two to finish drying, so in the mean time I’m not giving much thought to it. Well, I am worrying about my yardage. It would literally take a miracle for me to finish this cardigan without buying another skein of wool. And because I’m using Cascade Eco, which comes in 250g skeins, I really would like to avoid that…The yarn is widely available, and I know my LYS here (I’m at home, not at school) has it, but I don’t remember ever seeing it at the LYS up there. Hopefully, I’ll know FOR ABSOLUTELY SURE that I need another skein BEFORE I go back…this coming weekend. 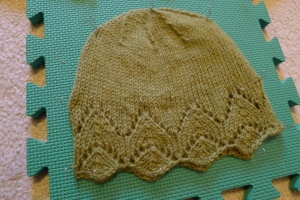 While I was waiting for the blocking to finish, I decided to cast on another hat. In keeping with my resolution to knit more from sources (books, mags, etc.) that I already own, I picked up the Edge of Lace Hat from 101 Designer One Skein Wonders. Of course, I had to make it with my own twist. Part of that twist is that I *forgot* (sheepish) to do the little garter stitch border that goes around the lace portion. Woops. I didn’t notice that until it was already on the floor, wet blocking next to the sweater, so that’s just plain out the window. The pattern also told you to just stop knitting and do a 3 needle BO instead of a crown, which I was not about to do. I made up some decreases that seem like they turned out OK. It fit my head, at least! You can check out my ravelry project page for the exact decrease pattern I used, it was pretty simple. 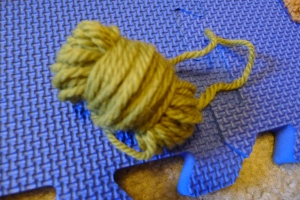 All in all, this hat was a pretty great stash-buster. It used just a wee bit less than the 45g of Paton’s Classic Wool that I had left over from my Nantes hat. I don’t think that I’ll keep it for myself, but I’m trying to start a drawer of knits that can be used for gifts if I *forget* about another occasion, so I think I’ll just drop it in there after it gets off the floor and I get some actual beautiful pictures. 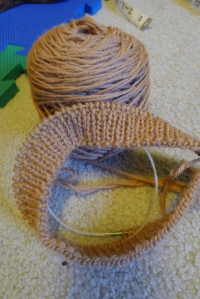 about an inch of ribbing, and the color is pretty true! now if I could just have remembered to lean back so that my shadow didn't show so much...

Speaking of beautiful pictures, I wish I had a FO SO BADLY today because it’s the first day in a while that it is bright and sunny and beautiful outside. Instead, all I have is this picture of some ribbing. It’s going to be the brim of a new hat design that I’m working on. I know that it’s going to be a slouchy hat knit using some Cascade Alpaca Lana D’Oro (50% Alpaca, 50% Wool) that I picked up at my LYS a couple of weeks ago. Still, about every five minutes I change my mind about the stitch pattern. I’m pretty sure that I want there to be some sort of twisting/traveling stitches (tentative title- ‘Twist and Slouch’), but I can’t decide how many. Plus, I have swatches from two other options blocking on my floor. The top part has a garter stitch background, but the bottom is only reverse stockinette. I like how the stitches in the garter pop so much, but I think the reverse stockinette has a simplicity that’s also charming. Any ideas?