Unfortunately, there’s been almost no progress on any knitting since the last time I posted. Mainly, this has to do with the ridiculous amount of schoolwork I’ve been doing. It’s the week before Spring Break, you see, and every one of my classes has a big assignment due. Luckily, 2 of my 3 papers are finished (!), and the last one is a group project that I just want to read over one. more. time. before we turn it in. I DO have one more midterm tomorrow afternoon that still needs a lot of my attention, but I think that right at this second I’m going to curl up and zone out. I deserve it. Toodles!

So how did you like that quick succession of designs? I hope you guys go try some out. Remember, the Kaylee hat will only be free until the end of the week, although the Twist and Slouch hat will be free forever!

So what have I been working on in the mean time? Well, there’s a secret project that I can’t really tell you about, so I’ll show you something else…

Swatchy...and I actually washed and blocked it BEFORE I measured!

That’s my swatch. What is it for? Well, it’s the Locke St. Cardigan. Knitting to Stay Sane put this pattern out a couple of weeks ago, and judging by the fact that I keep going back to the ravelry page and staring at it, I think it’s a keeper! 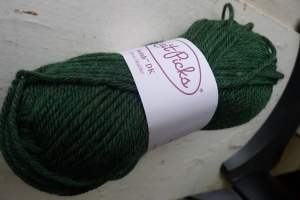 a nice, heathered dark green. I don't think it's too dark to see all of the nice detailing, though.

I grabbed 15 skeins of Swish DK in Forest Heather from Knit Picks, and it came in really, really quickly. They were having a sale on the bags of 10 skeins, so I had to grab one of those and then get 5 separate. I probably should have just sprung out a couple more dollars for a whole nother bag. I would have most definitely used it the extra at some point, and then my yarn would all be from the same dye lot. Although the numbers are very different, I haven’t been able to tell the difference, so hopefully you won’t be able on the finished cardigan, either. In the end, I’m pretty happy with my yarn choice. Even though the Swish is superwash wool, you wouldn’t know it with the feel. It’s very soft, and I’m pretty happy with that!

sleeve! Sorry it's upside down, the light was...backwards

While the pattern for the Cardigan is…long…I printed it all off. That way, it’s much easier to knit while watching TV on my computer. It is definitely a very complicated pattern, so I’m very glad that I did. Luckily, she starts with the sleeves. I think that’s a pretty good idea- it’s like dipping your toe into the shallow end of the pool! Plus, I won’t have that time when I feel like I’m almost finished with the sweater and then end up astounded that it takes so long to do the sleeves.

I don’t envision this pattern going very quickly. Between the crazy cableing and DK yarn it will definitely be a long-term project. That might be what I need right now. I have been stress-knitting a lot, so I need something that I won’t burn through very quickly. Hopefully, though, I’ll have some progress to show you this Wed. It might be a quick post- although the stress is high, the time for knitting and posting is not. Sorry! 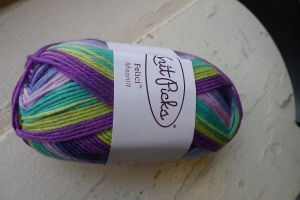 Technically, the colorway is moonlight or something like that. I think I'm changing the name to Birthday Party!

And, by the way, I wanted to show you the other thing that came from Knit Picks. I grabbed a skein of self-striping Felici Sock Yarn. It’s surprisingly soft, and I’ve been coveting other people’s striped socks for a while. I bet this is gonna make a fantastic pair…eventually!

Why yes, yes it is! Here, I would like to introduce Kaylee to you.

Using sport weight yarn and a textured chevron pattern, Kaylee allows a certain amount of breathability, while still creating a unique, comfy hat perfect for transitional seasons. I really love how the spiky area looks- very cute! Plus, the stitch definition provided by Wool of the Andes- a 100% wool yarn- will show off the chevron stitch perfectly. Check out some of the versions my test knitters made here– it looks really great in handpaints, variegated, and striped yarns, too! 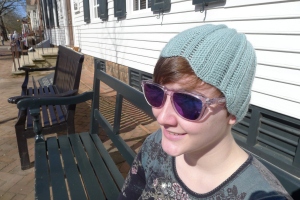 Kaylee and my roomie

The hat is sized from a perfectly adorable baby topper all the way up to a fashionably chic adult large. baby (child’s small, teen, adult small, adult large)= 13” (16”, 18.5”, 21”, 24”). The pattern includes both written and charted directions for the body and decreases of the hat.

Kaylee and me. Ok, we passed the sunglasses around- it was pretty sunny!

This pattern is made in conjunction with the Knit Picks Independent Designer Program. Although Knit Picks hasn’t gotten the pattern up yet, you can still find it on ravelry here. For this first week (until 1/4/12) it will be available for FREE! After that, it will go up to a pretty reasonable $1.99.

Spiraling, from the back!

I have a new pattern out! The C’Mon Baby (Twist and Slouch) hat is a slouchy beret perfect for the hipster in all of us. The lacey, twisting rib will catch the knitter’s attention without being too difficult to remember. Plus, it creates a nice looking hat! I’m particularly in love with the spiral-y thing on the crown.

Side view. My awesome roommate was modeling in Colonial Williamsburg- super fun!

You will need about 80g of worsted weight yarn to complete the project. I recommend anything with some drape. Alpaca blends, like Cascade’s Alpaca Lana D’Oro, work really well. It is a bit big (the model has a larger head…) so pay attention to guage and don’t be afraid of going down a needle size.

Laughing at my photography antics- "put the hat in the light!"

If you’re interested in this FREE pattern, check out the ravelry pattern page here, or directly download the pdf here. As always, you can also see it way on the bottom of my designs page, here.

I am so close to finishing this blanket it’s not even funny. Of course, it’s mostly stress knitting, because I am so not close to finishing my papers that it’s pretty funny. When I finish and it’s blocked, I think it’ll measure about 30″ by 36″. I know it’s an awkward size, but what can you do. I think any longer might be strange, and it’s not like I’m about to rip the whole thing out and re-knit it wider. And, to tell you the truth, I’m getting a little tired of the stitch pattern.

Still, I’ve only used about half of my third skein of yarn. I don’t think that’ll be a huge problem…I can always stash it. I’m sure that I’ll need to be making some baby things soon. I’m in college; eventually my friends are going to start getting married and having babies. I’ll be an adult!

As I mentioned in my last post, I finally got the chance to cast on the Chalice Baby Blanket now that I’m finished with the knitting portion of my sweater. The pattern calls for a worsted weight yarn and size US 10 needles, I guess to open up the lace. Of course, I didn’t want to do that. I mean, why would I possibly want to do what a pattern asked of me? I wanted something somewhat denser to really keep that child warm, so I compromised with a US 9 needle. Of course, when I then CO the required number of stitches it looked way too small. Well, it looked too small and my tail was really, really long and I wanted to use it up. After searching through the pattern for a while (in 2 different pdfs- one for the written pattern and one for the chart- it didn’t come out and say how long the stitch repeat was) I ended up with 103 stitches for an extra 2 repeats. If I could go back, I would probably add another ten or twenty stitches. After all, I have four skeins of yarn…

it's so big! Sorry for the bad pictures, it's pretty overcast outside...

As you can probably tell, this pattern is pretty addictive. The relatively simple lace is really, really easy to memorize line by line and I’ve been keeping the pdf cropped into the corner of my screen for easy access. I finished my first skein of yarn after about 24 hours- which may be a record for me. So far, I’m about 20 inches into the pattern. As, after stretching the knit (lace!), the lace portion of the body is about 24 inches long, I’m thinking I’ll go at least until it’s 36 inches tall. I know this won’t be a traditional square, but I really, really want to use up this yarn. I mean, what else will I do with a light yellow acrylic blend? Hopefully, I’ll have leftovers for a baby hat or something really small and that’s it.

It’s been a while since I’ve done any real lace- for some reason, I’ve been on a big cabling kick recently. Well, it really feels like DESIGNERS are on the big cable kick, and I just keep seeing some scrumptuous cables that I really, really want. In fact, I may or may not be putting in a big order soon…I’ve been stalking the wonderfully cabled Locke St. Cardigan, which is in the new Urban Collection by one of my favorite bloggers: the Crazy Knitting Lady. It’s knit in DK yarn, which I’m having trouble finding for what I’m willing to pay. Webs has some relatively cheap 100% wool (Legacy O-Wool DK) that I’ve been thinking about, and the Swish DK from Knit Picks is slightly cheaper, plus free shipping! I don’t usually like superwash yarns…has anyone ever knit with Swish? Is it soft, or does it have that superwash feel? Oh, decisions!

Even though it isn’t at the wearable stage, I’m still gonna call my Rocky Coast Cardigan finished. I mean, the knitting is all done. It needs a really heavy block to make sure everything is a little more…proportional…but I’m sure that will work. As of now, I don’t even want to show you a picture of how it looks on me, the fit is so strange. Instead, I’ll give you this:

and promise to show the post-blocking pictures after I get a chance to do it over Spring Break. And trust me, I am so much more anxious for these next two weeks to go by then you are. Trust me. 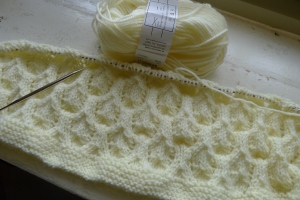 Baby Chalice Blanket. And I promise that there is NO green tinge to the yarn, it is a pure, baby yellow.

In the mean time, I’ve moved on to a quick little baby blanket. This is the Baby Chalice Blanket. I’m using Plymouth Encore Worsted (75% Acrylic, 25% Wool) in a light yellow color. I’ve done a little modding, but so far it’s looking pretty nice, and knitting up really quickly. I’m sorry to FO and go, but, really, paper writing calls!